Mortal Coil Performance Society is proud to be remounting its 2011 hit production of Salmon Row at the Britannia Shipyards National Historic Site in Steveston BC.  This site specific re-imagining of the vibrant communities that fished by the banks of the Fraser River brings back the team that created the original sold out production and will be running from August 15 to September 1.

Join us again this year as we explore the stories of the First Nations, Chinese, and Japanese and European immigrants who came to the west coast of BC in search of a better life and in chase of their dreams. This compelling and vibrant piece of theatre explores issues of immigration, ethnic conflict, labour history and memory. This is also the story of the seemingly endless resource of salmon in the Fraser River, and the mystery of its journey as it meets the need and greed of its human predators.  Whether or not this story will be ongoing remains to be seen.

Taking place on site at the Britannia Heritage Shipyard in the Steveston area of south Richmond where these stories took place hundreds of years ago, the audience will move with the show and actors from one site to another, becoming an integral part of the show. Mortal Coil's signature use of stilts, puppets, music, masks and actors bring this play to compelling life.

Join us nightly between August 15th and September 1, 2013 (excluding Monday August 19 and 26) in Steveston to experience this compelling piece of theatre and history. Shows begin at 8pm, rain or shine.

Our 2011 production sold out in 4 days so don't miss your chance this time! We'll see you there!

Some Audience Comments from 2011:

"Kudos to the performers, band and all of those people behind the scenes for a memorable, creative, thought provoking performance.  Many thanks for a wonderful evening! I attended your play last night and I must say it was OUTSTANDING! Your technique- moving the audience- was brilliant but more importantly, you spoke to many very difficult topics (racism, Indian children and residential schools and internment of Japanese) in a way that informed and elicited empathy without being divisive. I felt you brought us TOGETHER as a community around these topics.  Done badly, this could have resulted in polarizing the community. I was so touched by this play. Thank you so much."

"The play was wonderfully done and we are so proud of the work that was exhibited. Thank you for your trust and support in making a lovely evening for my guests from Toronto. (They were very impressed!) Have a great run!"

"I would recommend this performance to anyone who appreciates creative and moving theater, and in particular history buffs with an appreciation for art, and some background in the BC canning industry. The Britannia Heritage Shipyard is a historical treasure and a perfect backdrop for Salmon Row. Please continue to support works of this nature. Short story: Creative and honest. I wouldn't change a thing. If you have the opportunity, see it. (Bring mosquito repellant)."

A huge thanks to our sponsors: 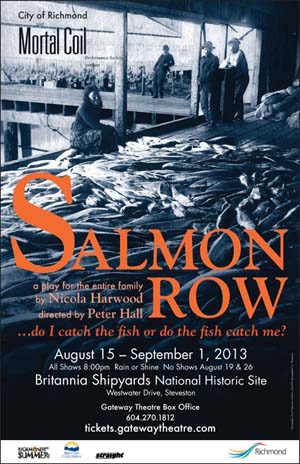